Resident veterans and their immediate families eat free Nov. 11; all others $14

Bensenville, Ill.— U.S. Armed Forces veterans residing in Bensenville and their immediate families will be recognized with a free breakfast when the Bensenville Park District, Village of Bensenville and Fenton High School join to salute their service at the annual Veterans Day Breakfast 9 a.m. Friday, November 11, at the White Pines Golf Club, 500 W. Jefferson, Bensenville. 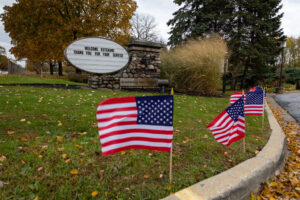 “Serving in the armed forces is one of the most selfless and courageous things someone can do for our country,” Vallez says. “We are pleased to celebrate the service of our local veterans, and joining together to thank them with a free Veterans Day Breakfast at White Pines is one way we can do that.”

In addition to recognition by the dignitaries, highlights of the breakfast include a presentation by retired U.S. Army Lt. Col. Ryan Yantis as well as three winners of the Defending Freedom Essay contest from Fenton High School. Yantis’ military background includes more than 22 years of service as a cavalry officer and army spokesman. He was deployed in more than 33 countries in Europe, Asia and Africa in addition to working in the Pentagon during the 9-11 attack.

Although the event is free for resident veterans and their families, pre-registration is required by Friday, November 4, at the Deer Grove Leisure Center, 1000 W. Wood Street, or by calling (630) 766-7015. Other members of the community, including non-resident veterans, are welcome to attend the breakfast for $14 per person.

« Back to All News Items